Storing Solar PV Electricity For Use At Night

At the moment the average solar installation in the UK will produce an excess of electricity for the typical household during daylight hours. Peak demand for electricity is typically during the 12 hour period from 8am till 8pm in the evening. During the summer months with the longer days solar power can meet most of the power demands for households with solar pv installed. On weekends according to national grid data power demands are about a third less than during a weekday.

What happen to solar power that you do not use?

Currently with most grid tie systems which covers most solar photovoltaic installations in the UK any excess electricity that you do not use is exported back to the national grid. You get paid very little for this, in fact the way the current system is set up you will get about 3 pence for every kilowatt that you export and the grid will sell that kilowatt electricity to your neighbour for about 13 pence. This is a system set in the favour of the 6 big energy providers in the UK.

If you have had free solar panels fitted then you do not get anything for the surplus electricity that is exported. This means for people with both paid (see solar panel grants) and free solar systems it is better to use all of the electricity that your panels generate rather than let it go back into the grid. It can of course be argued that at least the exported electricity being used by a neighbour is offsetting electricity that would have been generated by a less efficient and dirtier coal fired power station.

How to store surplus electricity from solar for later use

To be able to use your surplus solar energy generated by your panels you need a way to store it. There are several methods that are currently technologically possible so we will take a look at these methods rather than speculating what technologies may or may not arise in the future.

Crediting your electricity with the grid

The most cost effective and most sensible way would be to credit your electricity meter with solar credits that could be used at a later date. This would mean that if you generated 10 units of electricity during a long summer day but only used 2 of those units then the 8 surplus units could be exported to the grid for which your meter would register as 8 credits. These credits could be stored indefinitely.

Over the winter when the days are shorter and at night you could draw on those credits and use them rather than having to buy electricity from your energy company. In theory with a 4kW solar pv system a typical household could generate enough electricity over the course of a year to meet all of the households needs. For the consumer this would mean the possibility of never having an electricity bill again.

This type of net metering credit system is being used in some parts of the world but unfortunately not in the UK. As this sort of system does not benefit the big 6 energy suppliers in the UK this system is unlikely to be implemented unless we get a change in government to a party more likely to implement such as scheme such as the Green Party.

Probably the most feasible option that is starting to gain credibility is to use any unused electricity to heat your water. Most homes in the UK have a hot water tank with an electric immersion. Most homes use a gas boiler to heat their water and the electric immersion is for emergency use if the boiler should stop working. Instead of exporting your surplus electricity during the day this energy could be used to heat your water thus reducing your use of gas for heating your water.

You could manually switch on your immersion during the day but the problem is that most immersions have a 3kW load which means that your solar panels are unlikely to meet all of this demand all of the time. This means that if you rely on manually switching on your immersion heater you run the risk of your panels not being able to meet the 3kW demand for the heater and having to draw the remainder of the energy from the grid which is not a cost effective solution.

So with a manual system unlikely to work then an automatic system needs to be installed. There are commercially available solutions that automate this process. They work by detecting when your solar panels are generating surplus electricity and then direct this electricity to heat or pre-heat your water ready for use later in the day. 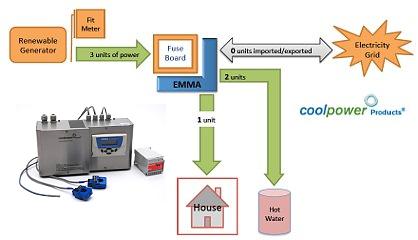 Irish company Cool Power Products have a product called the EMMA SP15 which manages your renewable energy system be it solar, wind or water power. Once installed it can be set up to direct electricity that would otherwise be lost to the grid to heat up our water via your immersion heater. The benefits of this system are that you are using free electricity to heat your water that would otherwise be lost reducing the demand on your gas boiler and reducing your gas bill. However the device is not really aimed at small scale domestic users who just want a simple solar immersion controller and at £1,500 it is not really a cost effective solution for the job.

Additionally for those who have a paid for solar system that have a deemed export tariff it means that you will still get paid for electricity even though it hasn't actually been exported. No many people have export meters fitted due to the costs so your electricity supplier deems a certain percentage of your electricity will always be exported back to the grid for which you are paid about 3 pence per kilowatt. This does not affect you tax free feed-in tariff payments which are based on the electricity that your panels produce whether it is used or not.

Another system designed and fitted by Chris Rudge Renewable Power acts as a solar immersion controller. As yet I do not have the full details to compare the systems so I will just provide the information that is openly available on the net. The system diverts electricity to your immersion when the panels are producing enough electricity. In summer this will be enough to fully heat your water for us and at other times of the year pre-heat your water so your gas boiler does not have to work so hard, effectively reducing your gas bill.

Chris claims his device costs around £100 in parts but obviously need to be assembled and properly installed which will make it more expensive but still a cost effective solution to store your daytime surplus power in the form of hot water. Essentially this is offsetting your gas bill and saving you money, these savings would then go towards covering the initial installation cost of the device.

Here at Free Solar Panels UK I often wonder why something has been done one way or another or why if there is an obvious need for something a cost effective solution has not been developed. There is a need for an affordable and simple to use device that solar installers are able to fit at the time of installation. A device that can direct surplus solar energy to the customer's immersion heater rather than the power being lost to the grid. Unless homeowners are going to be able to get the most from the green energy their panels are producing it is not going to encourage more people towards renewable technologies leaving fossil fuels as the main source of power in the UK. Further more it will be a greater proportion of electricity being imported to the UK from Europe which already runs into the thousands of megawatts a day.