The areas around Wakefield have seen a high take up for solar and particularly for free solar panels. Although not famed for its sunny climate Yorkshire is still a suitable location to take advantage of solar and be able to generate about the same amount of electricity that a typical Wakefield household would use over the period of a year. With solar the larger your roof area the more panels can be installed which means the more free electricity they will generate.

Whether you are getting paid solar or taking up the free solar panel offers in Wakefield you should always choose a reputable company. If you have just plumbed for free solar and haven't even considered buying your own solar photovoltaic system then it is well worth reading up of the solar panel grants that you could be benefiting from that far outweighs the benefits of the electricity your system would generate.

Data has been released giving figure for the number of installations that occurred during 2010. Although the data does not distinguish between free and paid solar it does show the number of residential installations using solar PV that were registered during that year. The Wakefield (WF) postcode area covers Wakefield and many surrounding areas and villages. There were a total of 153 installations in total with a total 423kWp of capacity. This means that a total of 360,000 kilowatt hours of electricity could be produced through solar every year from these installations alone.

The average size of a typical solar photovoltaic installation in Wakefield is slightly above the national average at 2.76kWp which means that a typical household could produce about 2,350 kilowatt hours of free electricity a year which is about two thirds of the amount a typical household would use in a year. 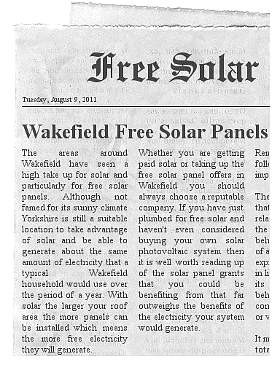 Unusually Wakefield town centre also had a 6 installations totalling just over 16kWp, this is unusual as according to the data the town centre there are rarely properties that have domestic solar installed. All but one of the solar systems installed in the Wakefield area were over the governments 4kWp limit for the higher tariff rate with many homes sensibly sticking to the 3.96kWp limit to ensure the highest feed-in tariff payments. This could also indicate a high number of free solar panels in Wakefield being installed.

The hotspots for Wakefield are the WF2 (Kirkhamgate, Kettlethorpe, Lupset, Newmillerdam, Sandal, Thornes, Walton) and WF8 (Darrington, Kirk Smeaton, Pontefract (Monkhill), Thorpe Audlin) which had a combined total of 34 individual installations. There were a number of very small installations of around one kilowatt which equates to about 4 or 5 panels. This tend to happen if people are buying solar and do not have the funds for a larger system or more commonly the available south facing roof area is limited to the amount of panels that you can fit.

The 100 percent renewable energy supplier Good Energy claims the UK could be generating all of its electricity using renewables by 2050.