I have been getting a lot of interest from people about the Eon free solar panels offer and whether or not it is a good deal. They are one of the larger energy suppliers offering these types of deal along with the British Gas solar panel offer. The interest shown from these recognisable brands is I believe due to their larger marketing budget and the trust in their brand name. This is contrary to the fact that they contract out the actual installations, not that this means an inferior job as they use experienced and accredited installers.

The British Gas mySolar energy scheme is at the time of writing currently on hold whilst they find a new installation partner. This has been on hold for the past 3 months but they will not tell me what went wrong with the old installer. Eon still has their offer active but you have to be an existing customer and they charge a £99 non-refundable administration fee. 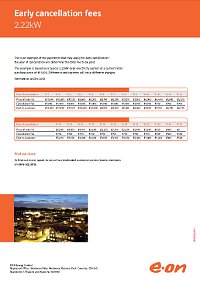 Digging around their site I found some of the small print. I am sure most other installers have similar conditions but this refers specifically to their cancellation fees for their Solar Exchange scheme. Anyone considering entering into a free solar contract should be aware that they are entering into a 25 year contract. Essentially you are renting out your roof to the installer who is using it to install the solar panels in order to generate electricity and earn a tax free revenue from the feed-in tariffs.

This is why it is important that you are willing to have the solar panels on your roof for the contracted period. For most people this will not be a problem as they are not going to use the roof for anything else. However if you are planning on a loft conversion, extension or other work on your house that may require changes to your roof you may want to rethink. You may be able to get the panels removed temporarily for things such as roof maintenance and this will be stated in the contract.

But what if I move home?

If you do decide to move them the panels would stay on the roof, you can't take them with you. If you sell your house the contract would pass over to the new homeowner. You must consider whether or not you may think that this may put off a potential buyer. Most people seem to have a positive view of having solar panels on the roof as it means that their electricity bills will be lower. Solar especially paid solar systems because of the attractive tariff you can earn are a big selling point for homes. Who wouldn't want to buy a home that earned you a tax free income year on year?

So you are aware of the potential pitfalls and you have to weigh this up with your own circumstances. I have had emails for several people wanting free solar rather than having to pay for it even though they could afford to pay for it for various reasons. The most common reasons are that they are retired and any panels they invested in would outlive them so they wouldn't get the full benefit. Also some are concerned about the future of solar and would therefore prefer the installer to shoulder the risk rather than them.

In 2010 the UK invested 3.3 billion dollars on clean energy technologies, half of this went on offshore wind farms. Germany invested 41.2 billion the same year, over 12 times as much.